Overall volumes recovered to -0.7 per cent from -4.1 per cent in the quarter ended March. (Photo: Bloomberg)


Consumption of fast-moving consumer goods (FMCG) like packaged foods, beverages, and toiletries revived in the April-June quarter in urban markets but was negative in rural India as people opted for smaller packs, said NielsenIQ on Tuesday.


“The industry also observes positive momentum in volume along with price-led growth,” NielsenIQ said in a press statement. 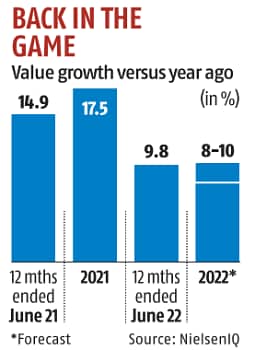 “Overall, this quarter sees a consumption revival across categories in FMCG, primarily led by a jump in unit growth. Urban markets have turned towards a positive consumption growth, and rural markets are following closely.” said Satish Pillai, managing director–India, NielsenIQ.


“This beats the last two quarters of consumption decline and highlights the onset of cautious optimism among consumers. Also, the consumption recovery and promising macro factors support NielsenIQ’s forecast of double-digit growth for 2022” he said.


“Within both foods and non-foods, there is a drop in average pack size growth and consumers continue to prefer smaller packs which is evident by the high unit growth. Grammage reduction is also a catalyst for this behavior to a great extent. Manufacturers and retailers must keep an eye on the changing consumer preferences and manage their portfolio accordingly by ensuring availability of small packs in maximum stores”, said Sonika Gupta, customer success lead (India), NielsenIQ.


The foods segment has seen a positive volume growth of 1.8 per cent in the April-June quarter as non-foods continue to be negative, there is a marginal uptick (-6.4 per cent in April-June vs -9.6 per cent in January-March).


Non-essential personal care categories, such as perfumed deodorants and colognes, recorded more than 40 per cent volume growth, on the back of summer season. Skin creams, coconut oil, hair dyes, and talcum powder too had positive volume growth over the same period last year.


NielsenIQ forecasted that the FMCG sector would grow 8-10 per in value terms this year, considering government policies, inflationary pressures, and other key macro-economic factors.


“The first half of the year had an 8 per cent value growth, indicates an overall positive outlook for 2022. This is echoed in the forecast for the year with the industry slated for a double-digit growth rate for the full year of 2022 vs 2021” said Rajesh S Shirali, data science market and client engagement lead, NielsenIQ India. In 2021, India’s FMCG market grew 17.5 per cent.


“As we have seen historically, the second half of the year will be driven by the festive season, and normal monsoons that will give the necessary push to consumption patterns for the sector,” he said.